Transparency and openness are really important to C4 and it is something we have always worked to incorporate in our processes. We realized recently though that although we work hard at this on a local level, we haven't really had a venue to discuss the same to the rest of the community. Now that we have this blog we look forward to discussing our processes and procedures, and more importantly, getting feedback from the community.

The Certified Bitcoin Professional was born out of necessity. Our own necessity at first, and then through the realization that other organizations are looking for similar. Michael Perklin and I started the outline for the CBP and CBX about a year ago now because we were trying to hire bitcoin professionals and were having a hell of a hard time. We needed an accountant, but finding one who understood bitcoin was a challenge to say the least. We needed programmers to help with projects, but despite saying they understood bitcoin, their actions and beliefs on the space convinced us that this wasn't necessarily the case.

We needed a measuring stick that we could easily call upon to find out if these potential employees, partners and vendors really knew their stuff. The "We" quickly grew from ourselves to the bitcoin ecosystem as a whole.

There are amazing projects out there and they need all sorts of people to help with them. Accountants, Lawyers, Programmers, Project Managers, System Administrators, Marketing Leads and Office Administrators to name just a few.

The Certified Bitcoin Professional was created to measure high-level bitcoin knowledge. It is designed to see if a candidate understands what the bitcoin network is and how to use it safely.

Finding Peers for Review and Contribution

This is not a project that we took lightly. From the very beginning we believed that this should never just be 2 people working together to define an industry. Once we had a goal we immediately reached out to other respected people in the cryptocurrency space for peer review.

First we found Russell Verbeeten, who was already looking to start an education project in the Bitcoin space. Education and certification go hand in hand, and having someone who was already dedicated to building a training program was kismet. Together, the three of us developed a committee of peers who all worked very closely to define the key portions of the Common Body of Knowledge (CBK) and then the questions for each section.

We really can't be more proud of the bitcoin community members who stepped up and helped put this together. The committee includes:

Forming the Common Body of Knowledge

It wasn't easy to take a new technology and define the key aspects that a professional should know. We definitely went through a number of revisions.

The CBK was actually built along side the question database concurrently. As we created and debated new questions, we tried to figure out their themes and how they fit into the big picture. These themes allowed us to see how questions related and differed from each other.

Question development took three or four months, with members of the committee meeting weekly to discuss their own separate progress. Throughout the process, we went back and forth to the CBK and the Questions, making sure that changes in one were reflected accurately in the other.

Things we initially thought would make amazing questions ended up being debated heavily. Together we realized that this test was not about bitcoin trivia, it was about bitcoin knowledge and understanding. Our key realization was that knowing what company does X, Y and Z was silly to test.

Knowing what exchange operates within Canada certainly doesn't help define a professional in Canada, let alone those living in European or Asian countries.

Knowing what wallet service has the 'best' features is subjective and misses
the point.

Now, on the other hand, understanding the security features available on most exchanges and knowing what wallet features exist and their applications... that is where our focus needed to be. That is what our questions test.

Reaching out to more experts

Did I mention how proud I am of our CBP committee? They are awesome.

Of course, even with our amazing committee, there are people in the bitcoin space that have a lot of community respect - and for good reason - and we wanted to hear what they thought of the CBP. We weren't looking for their approval, but we definitely wanted their criticism.

One of the incredible parts of the bitcoin space is just how truly accessible the experts really are. The response we had is certainly a testament to that.

We reached out to Andreas through email and asked him to take the test. We had spoken to him previously about C4 at the Bitcoin Expo in Toronto, so he was interested in seeing how far we had come.

He provided us with some great feedback privately, which we discussed within the committee and then applied to our question database.

More publicly, he was also nice enough to go to twitter and announce that he was one of the first Certified Bitcoin Professionals.

I completed the certification for "Certified Bitcoin Professional (CBP)” at https://t.co/CSkAwlpNmG

Of course, nobody had really doubted Andreas' abilities before his announcement, but it was a nice gesture to our organization. He also continued to respond to people who had questions about who the exam would help and if he thought the exercise was worth it.

@IamyourDaddy I’d use it for hiring purposes, to verify knowledge of an applicant. Yes, we need some good professional certs

@CElston If hiring in the space, you might find it useful to verify the knowledge of a candidate. At least at a basic level. It’s well made

We also reached out to Jeff Garzik for his feedback on the exam and the overall certification process.

As with Andreas, Jeff gave us a lot of great feedback which we took to heart and integrated into the question process.

Took part of an exam at http://t.co/1t2CS0XGF6. +1 They are taking feedback seriously, and constantly improving their tests. cc @mperklin

A central process for the decentralized environment

Some have asked us to open source our question database, to give the entire community a chance to contribute. Honestly speaking, we would love to do so but, in reality this just isn't feasible. An open question database just means that everyone has the ability to search for the answer at the time of testing and that defeats the purpose. If someone who knows nothing about bitcoin can pay a few bucks and use Ctrl+F to ace an exam with 100%, what good is the exam?

For that reason, our question database is kept confidential to the committee members and advisors. This is to maintain the value of holding a Certified Bitcoin Professional designation.

Other suggestions have included a completely decentralized process where community members can vouch for the expertise of other members which would allow the certification process to exist without any need for a not-for-profit organization. We were intrigued by this possibility and ran a few simulations to try to make it a reality. "Decentralize all the things!"
We came to the unfortunate conclusion that sybil attacks were too easy to perform, and even if that would be solved, it depended too heavily on peoples' opinions rather than the candidates own knowledge. Certifications prove you KNOW something, not that everyone thinks you do. Countless examples of smooth talkers and con artists provide ample evidence that a centralized process is necessary. As much as we want to "decentralize all the things," unfortunately there are just some things that must remain centralized.

As a not-for-profit organization, we hope to use some of the revenue earned to apply it to these exact problems and try to find a logical way to decentralize the centralized process of professional accreditation - even if it means replacing ourselves with a small shell script. Until then, we will continue to operate as we are, while being transparent with our processes and dedicated to only providing top notch standards that will help cryptocurrencies grow and organizations use them in safe ways.

If you've been following along on our C4 blog for all of the #BTC2019 announcements, you can now read all official blog content on Blockchain Training Conference's Medium publication, and on the official BTC website here. We will still keep up our previous posts on the event for you here, 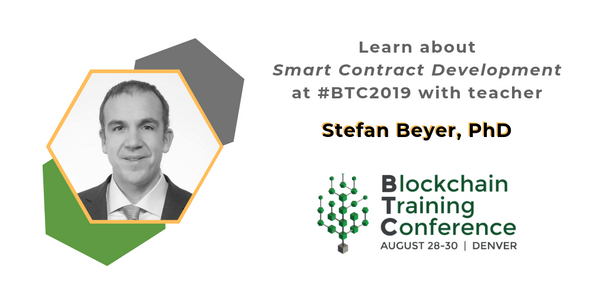 C4 is proud to hosting Blockchain Training Conference 2019 in Denver this August 28-30. BTC is different than your average crypto conference because instead of speakers, we have teachers. 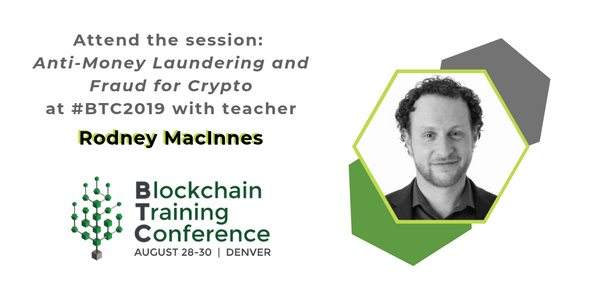 C4 is proud to hosting Blockchain Training Conference 2019 in Denver this August 28-30. BTC is different than your average crypto conference because instead of speakers, we have teachers. T